The Sir John Fisher Foundation was established in 1980 by Sir John and Lady Maria Fisher.

Sir John Fisher was the Chairman of James Fisher & Sons plc, the Barrow-in-Furness based Shipping and Marine Services Company. The Company was founded by his Grandfather in 1847 and is one of the world’s oldest shipping companies.

In 1939 on the outbreak of the Second World War, Sir John was called to the Ministry of War Transport as Director of the Coasting and Short Sea Trade Division. He played a large role in the evacuation of Dunkirk and in the planning of the landings in Normandy on D Day. In 1941 he received a knighthood for his work at the Ministry.

Lady Maria Fisher was a famous pre-war opera singer (Maria Elsner), but once married to Sir John she settled to supporting him in his established career.

Throughout his life despite a very active business career, Sir John’s interest in the affairs of the people of Barrow-in-Furness and the locality became legendary. Both he and his wife took a deep personal interest in many social and charitable organisations giving personal support as well as financial aid. Sir John gave a substantial proportion of his shares in James Fisher and Sons plc to The Foundation, so it could strive to continue that charitable tradition. 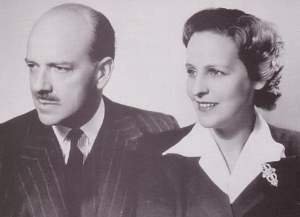